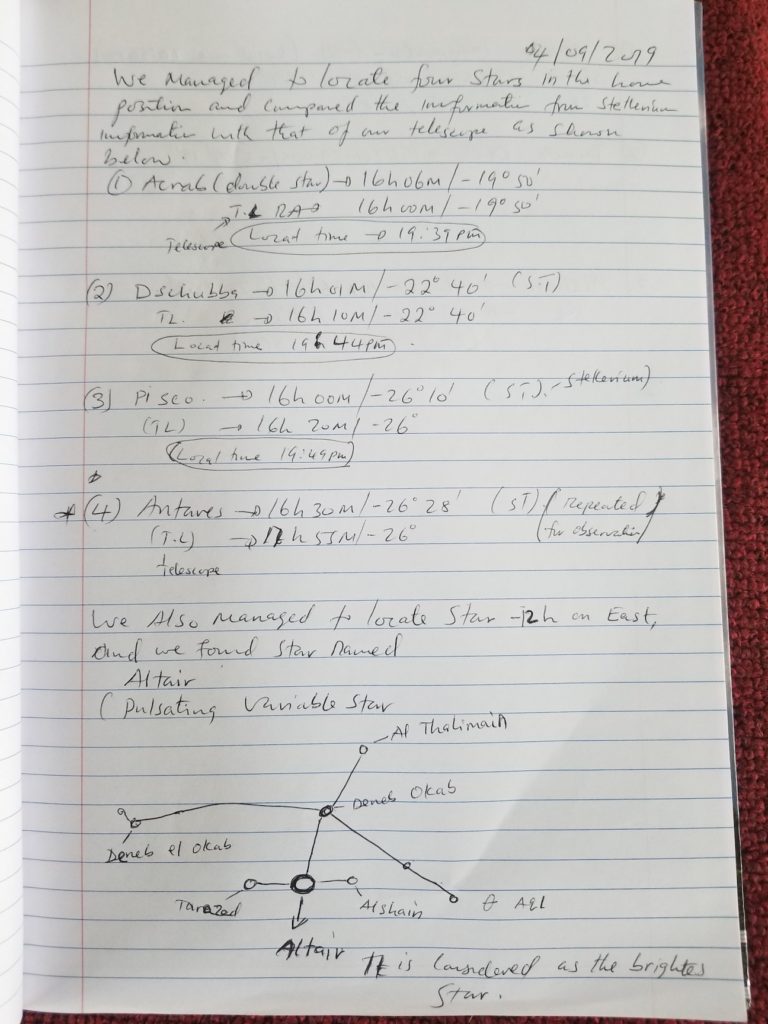 On Wednesday, September 4, Zacharia and Pendaeli opened the observatory for a survey of four stars. The goal was to establish how far off the RA axis of rotation is due to the remaining, incomplete alignment of the telescope. If we had just one night with more than an hour of clear skies after sunset, we’d have this done and move on. But such is astronomy. For all the understanding of the workings of the world, we do not (yet) control the weather (which is probably a good thing).

I have included the observation notes (top), as an example of how important it is to record data points for every experiment, no matter how seemingly simple or irrelevant to the long-term goal, as that history helps us prepare for the future endeavors.

The starting position (not noted) was the star Antares. As such, the RA and Dec coordinates were a perfect match. They then moved the telescope through 3 other stars before returning to the Antares again, all remaining on the Home side of the pedestal.

Clearly, we have a misalignment for the RA values do not match. This is not a drift test, rather a pointing test, but it does give us clues. The smaller errors are within the expected tolerance of a hand-placed telescope before advanced alignment techniques. The substantial error on the final measurement is likely a misreading of the RA setting circle or the circle was not set tight and slipped.

When next we have a clear night for at least one hour, we’ll conduct our final drift test and then determine how to adjust the mount alignment accordingly.

I want to emphasize on behalf of my colleagues at MMAO that this represents their first scientific experiment of any kind outside of the classroom, perhaps at all. With my being half the African continent away, I am little more than a guide through email and instant messaging.

Therefore, I extend my pride in the instructors and students of Ailanga Secondary School who in just one month went from having used a relatively simple telescope (if at all) to operating a sophisticated instrument while working toward professional alignment in order to be more equipped to see deep sky objects such as distant nebulae and galaxies.