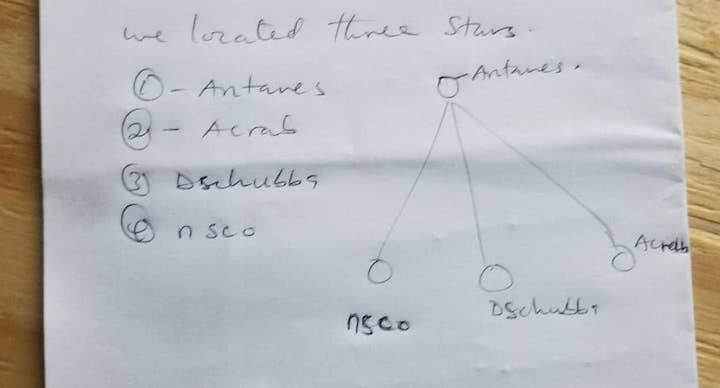 Last night Zacharia and Pendaeli attended the observatory in order to establish four stars in the “home” position of the 12″ telescope for both RA setting circle and drift alignment tests.The following is Zacharia’s summary of the observation session:

“Tonight Pendaeli and I found stars to locate at our home position in order to test properly our RA setting circle and compare the time difference between [the computer software] Stellarium and that of the RA setting circle, which we will do tomorrow. We learned that [the rotation of the] RA setting circle matches exactly to our clocks when we were tracking stars. That’s awesome for us because we didn’t know [this] before! And [as previously] noted … objects drift off the center … another test to be done soon.

We selected four stars: Antares, Acrab (a double star), Dschubba, and ‘pi Sco’. These will make the tasks of our RA setting circle tests and drift alignment much easier.

Most exciting for us, we viewed our first double star! Stellarium noted that Acrab should have two stars orbiting each other. While they were not clear through the 40mm eyepiece, when we inserted the higher power 32mm we were able to see a clear separation between the two stars. Amazing!

That’s what we accomplished. Ahsante sana!”