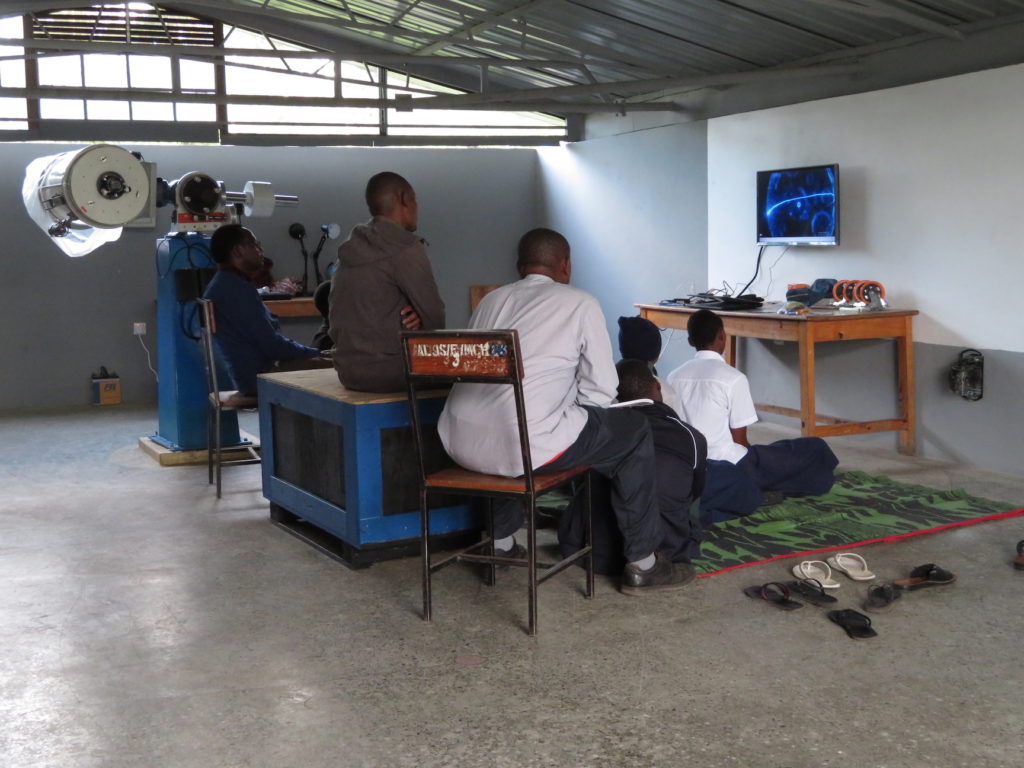 We are watching the COSMOS series with Neil deGrasse Tyson. For the first episode we enjoyed the company of four Ambassadors to the observatory and a dozen students, all but one girls. Last night, we had standing room only with more than sixty students in the Observatory. It was awesome!

The first episode tells the story of Bruno, a priest who conceived of a universe far larger than that accepted in his time. He shared his vision for the Sun at the center of our solar system, and many other suns with worlds like our own. In this vision, he celebrated the Creator as that of a much larger, much more dynamic universe than simple celestial spheres. For his refusal to recant, he was burnt alive by the Inquisition.

This opened a powerful, engaging conversation for why those in power are often afraid to lose their position, from government leaders to local politicians to teachers too.

The second half places the history of the universe on a one year calendar, from Big Bang to the evolution of the human species in the final one minute. This invoked a series of questions about the birth of stars and formation of solar systems and planets.

The second episode was entirely about evolution, starting with the domestication of wolves to become every breed of dog today, and then a whirlwind tour of the “tree of life”, mass extinctions, and our own shared ancestry with chimpanzees. While the students do learn about evolution in this local school, it is primarily taught as a function of history, not a function in motion now.

I gave examples of evolution as we see it in hospitals across the world with “super bugs” and growing resistance to antibiotics. We discussed our own species as one of the most homogeneous on the planet, all of us nearly identical despite the incredible diversity of our visual appearance as s function of gene expression, not divergence of the DNA itself.

Zacharia, an Ailanga teacher and Astronomy Ambassador and I fielded the questions proposed by the students, for a conversation that could have easily continued to the midnight hour.

My favorite part of that evening was when Carl Sagan’s original 40 second animation of the evolution of species, from single cell organisms to homo sapiens caused everyone in the room to gasp. The resulting questions ranged from “Is there any species that is not evolving now?” to “Are viruses living or dead?”

This is exactly why we pursue astronomy as an entry to science education—it invokes questions about physics, biology, chemistry, and the evolution of life itself.