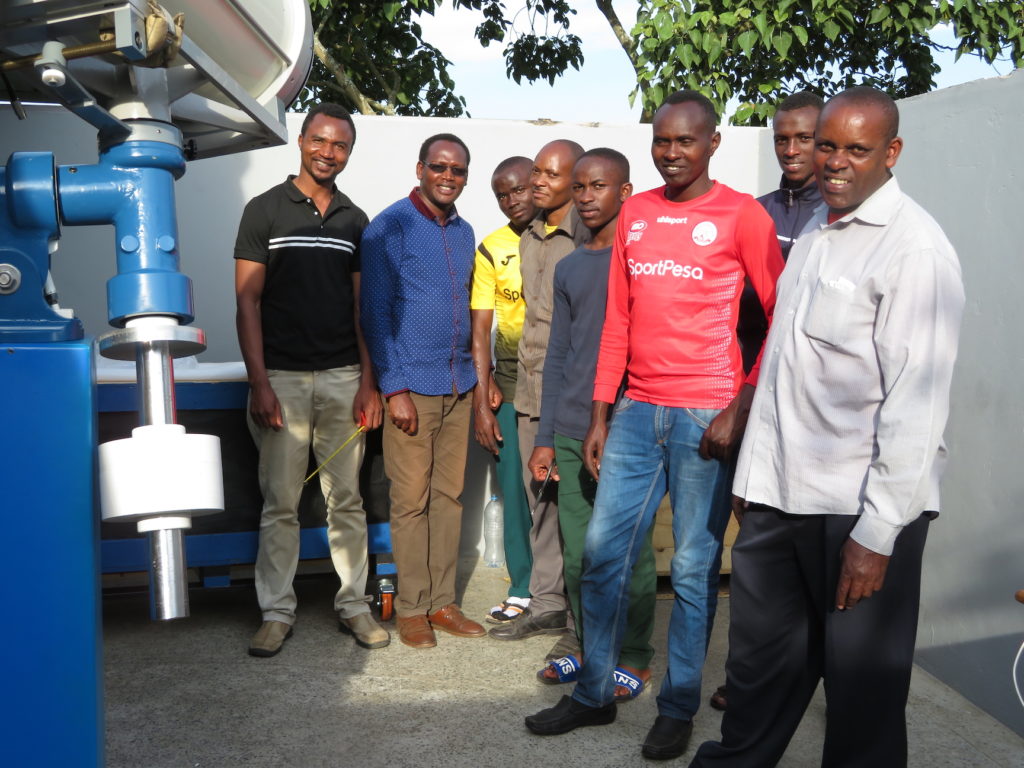 With my family Lindah and her son Liam, Bernard and Truphena again in their home in Nairobi Kenya, I returned my focus to the setting the telescope in its final position. I was joined by Telescopes to Tanzania Ambassadors Eliatosha, Elineema, Eliona, Pendaeli, and Zacharia, and Ailanga students David and [need to recall names] for this effort.

While we had three times before attempted to find polar north using “high noon” and the shortest shadow of the sun as defined by the Heavens Above website, we feel it is important to obtain this vector by our own accord. However, after three weeks we have not been granted a full hour of sun thirty minutes before and thirty minutes after the calculated high noon of 12:38-12:40 pm.

Once again we set our home built sundial (broom stick mounted on a sheet of plywood, bailing twine in tension holding the vertical position) and made certain it held 90 degrees all around.

We waited with pen and tape measure in hand … and waited … and were able to obtain six readings from 12:21 to 12:56 pm, but were missing those needed at the crucial 5 minutes to either side of 12:38 pm.

Between measurements, we conducted a series of linear approximations, starting both before (under) and after (above) the desired 12:38 pm, resulting in 0.9-1.1 mm change in the length of the shadow per minute. We fully understand that this is not a linear function, rather that of a parabolic arc, but for this brief period we were able to determine if 12:38 was likely to have produced the shortest shadow.

As we found the rate of change of the shadow to be similar both before and after the estimated high noon, we decided to fix the base of the telescope on a line parallel to that of 12:38, as captured the day prior.

We then spent nearly two hours leveling the telescope, using metal bars and washers as shims. The result is the top of the steel pedestal to be level within 0.1 degrees on all four sides, and exactly 90 degrees on the south face (the other faces are those of a trapezoid as the pedestal is wider at its base than the top).

If I could recall the names of my geometry and trigonometry teachers, I would reach out to each of them with deep gratitude, for nearly every theorem I memorized has come into play this past two weeks. But it is the Ailanga students who have come to the rescue with fresh recollection of the proper calculations for missing angles using sin and cos functions.

We carefully reassembled the telescope (for the fourth time). At the point of attaching the head we realized we had no easy way to make certain the head was parallel to the newly oriented base. We estimated, at first, but once the weights were attached, realized we could use the distance from the edge of the weights to south face of the pier as the Dec arm to provide a nearly perfect parallel identity.

However, last night we noted a drift in what appears to be both the Dec and RA. Before we shut down the observatory, we measured the equatorial axis alignment, and it had sunk from 3.3 to 3.0 degrees, the effect of the metal settling under the burden of the mass of the full assembly. Today we will easily correct this angle and tonight determine if our drift is reduced.

We now have two spotting scopes, one a battery powered “bull’s eye” without magnification, and the other an Orion magnified spotting scope with cross hairs. Both are now aligned with the primary tube, only a minor adjustment to be performed tonight for spot-on accuracy. 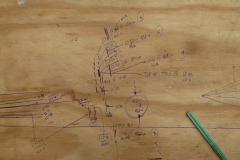 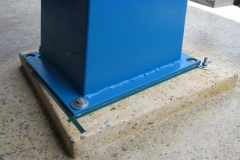 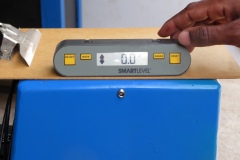 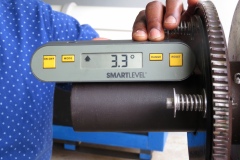 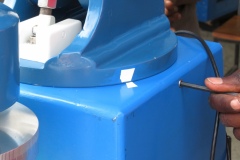 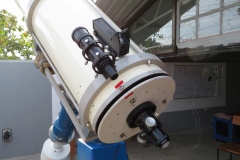