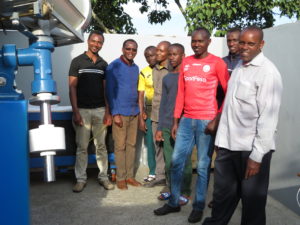 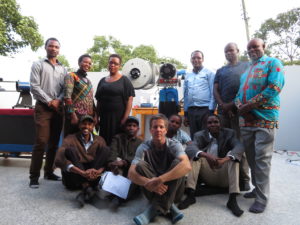 The Astronomy Ambassadors are active instructors in local primary and secondary schools. They were instrumental in the assembly of the principal 12″ telescope at Mt. Meru, and are active in the management of the observatory, astronomy education, and hands-on science education.

Elineema Nassari, Ambassador Coordinator to OSEO
I am teaching the subject of History at Kikatiti Secondary School. In 2011 I met the late Pastor Chuck and Sue, where in my passion for Astronomy was ignited! Since this time, I have been hopeful for the completion of the MMAO observatory and am now leading the collaboration between the Ambassadors and the governing Organization for Science, Education, and Observatory (OSEO) which manages the observatory. I am eager to learn and share with my students all that I can about the origin of the life, planets, stars, the cosmos itself–but what intrigues me most is that we are all made of star dust!

Zacharia Mujungu, Observatory Manager
I am teaching Biology and Chemistry at Ailanga Lutheran junior Seminary, where the MMAO observatory is located. I became involved in Astronomy in 2011 when the late Pastor Chuck and Sue visited Ailanga and introduced the use of telescopes and other subjects in science. Finally, after a long waiting, in this year 2019 I become one of the Ambassadors for Astronomy with MMAO and was daily involved with the installation of the telescope. For me, this generated a far greater interest in Astronomy, and my desire to share it with our students and the public is transformed. I came to realize Astronomy is at the frontier of science–and it’s fun!

Eliatosha Maleko
Eliatosha is teaching at Ilboru Primary School, covering subjects English, Geography, and Science in Standard Six. Since his work with the late Chuck Ruehle and Sue Ruehle in 2012, he has made astronomy center to his work as a middle school teacher. He has dedicated much of his time to various outreach activities in several public and private schools, and university colleges such as Dodoma and Patandi Teachers collage in Arusha, Tanzania.

Wilson Daniel John
Wilson Daniel began teaching Form 3 Physics at Nshupu Secondary School and is currently at the Institute of Accountant Arusha (IAA). He is an ambassador since 2014 when Mr. Milley and Elineema Nassary visited his school. He appreciates all that he has learned about astronomy since he joined MMAO.